The 2020 Elections and National Security: What We Learned, What Comes Next

Home/The 2020 Elections and National Security: What We Learned, What Comes Next 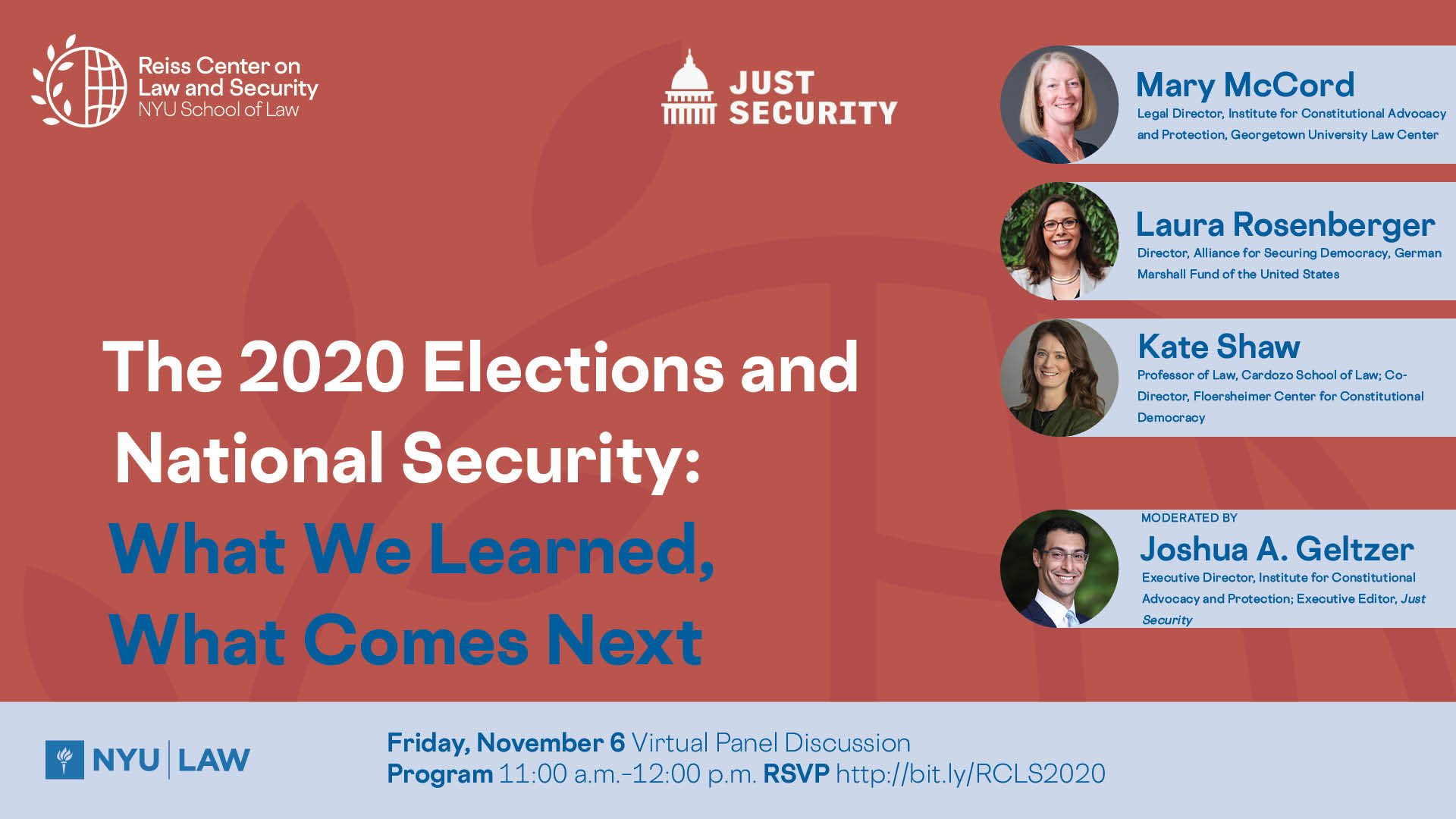 The 2020 Elections and National Security: What We Learned, What Comes Next 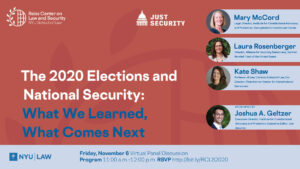 The Reiss Center on Law and Security and Just Security at the NYU School of Law convened a virtual conversation on the 2020 elections with an expert panel.

The panelists discussed the national security dimensions of the Election Day process, and the implications the election has for how the Executive Branch and Congress confront national security challenges moving forward, including disinformation, white supremacist groups and the rule of law.

Mary McCord serves as Legal Director at the Institute for Constitutional Advocacy and Protection (ICAP) and Visiting Professor of Law at Georgetown University Law Center. McCord was the Acting Assistant Attorney General for National Security at the U.S. Department of Justice from 2016 to 2017 and Principal Deputy Assistant Attorney General for the National Security Division from 2014 to 2017.

Previously, McCord was an Assistant U.S. Attorney for nearly 20 years at the U.S. Attorney’s Office for the District of Columbia. Among other positions, she served as a Deputy Chief in the Appellate Division, overseeing and arguing hundreds of cases in the U.S. and District of Columbia Courts of Appeals, and the Chief of the Criminal Division, where she oversaw all criminal prosecutions in federal district court.

Laura Rosenberger is director of the Alliance for Securing Democracy and a senior fellow at The German Marshall Fund of the United States (GMF). Before she joined GMF, she was foreign policy advisor for Hillary for America, where she coordinated development of the campaign’s national security policies, messaging, and strategy.  Prior to that, she served in a range of positions at the State Department and the White House’s National Security Council (NSC). As chief of staff to Deputy Secretary of State Tony Blinken and later as then-Deputy National Security Advisor Blinken’s senior advisor, she counseled on the full range of national security policy. In her role at the NSC, she also managed the interagency Deputies Committee, the U.S. government’s senior-level interagency decision-making forum on our country’s most pressing national security issues.

She received her master’s degree in international peace and conflict resolution from American University’s School of International Service, and received her bachelors’ degrees with honors from Penn State University’s Schreyer Honors College in sociology, psychology, and women’s studies. She is originally from Pittsburgh, PA, and is an avid Steelers fan.

Kate Shaw is a Professor of Law and the Co-Director of the Floersheimer Center for Constitutional Democracy at Cardozo Law School. Before joining Cardozo, Professor Shaw worked in the White House Counsel’s Office and clerked for Justice John Paul Stevens and Judge Richard Posner.

Joshua Geltzer serves as the founding Executive Director of the Institute for Constitutional Advocacy and Protection as well as Visiting Professor of Law at Georgetown University Law Center.  He is also an International Security Program Fellow at New America and an Executive Editor at Just Security. Geltzer served from 2015 to 2017 as Senior Director for Counterterrorism at the National Security Council staff, having served previously as Deputy Legal Advisor to the National Security Council and as Counsel to the Assistant Attorney General for National Security at the U.S. Department of Justice.  He also served as a law clerk to Justice Stephen Breyer of the U.S. Supreme Court and, before that, as a law clerk to Chief Judge Alex Kozinski of the Ninth Circuit Court of Appeals.