What’s Happening in Syria?
Anatomy of a Crisis

Home/What’s Happening in Syria?
Anatomy of a Crisis 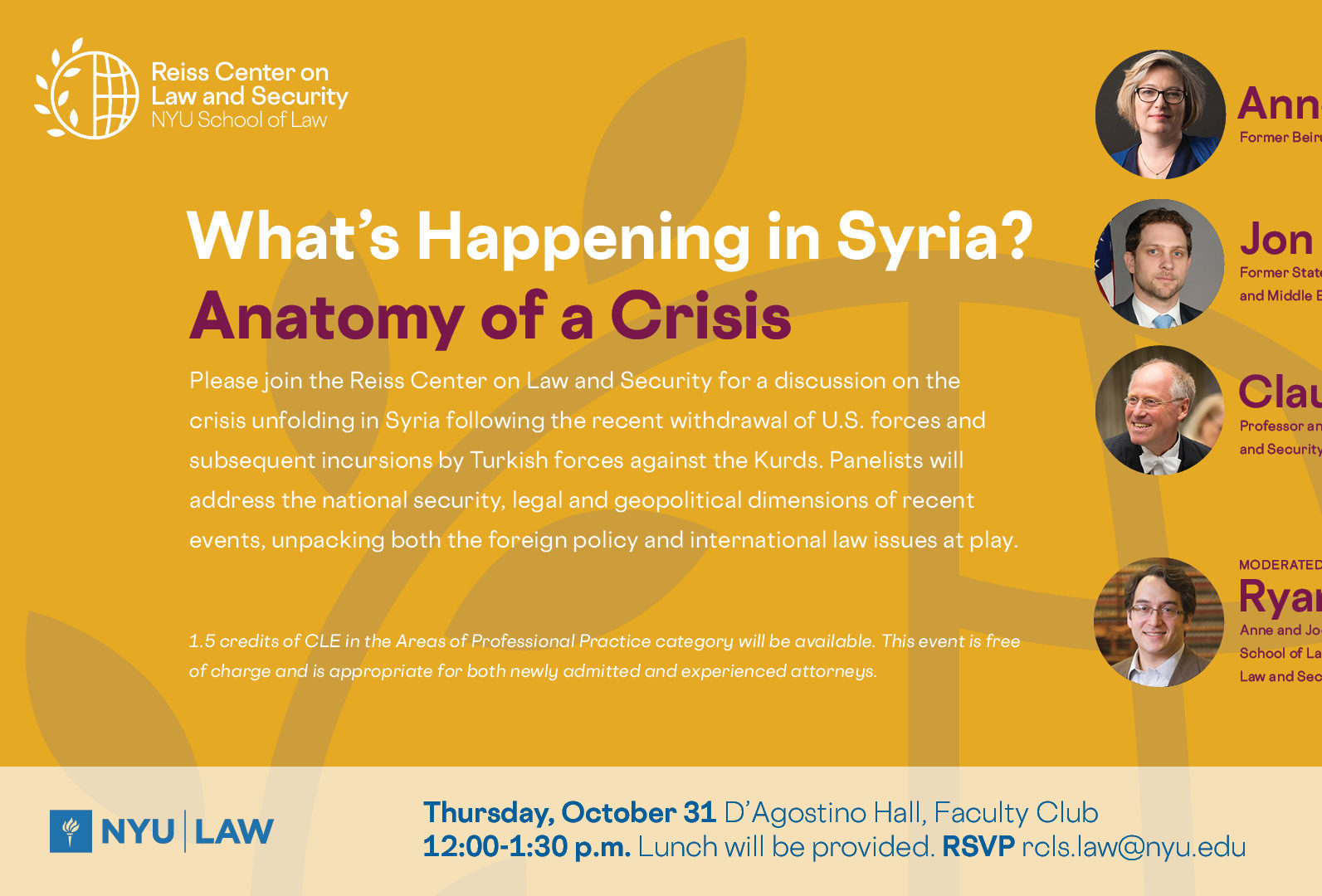 What’s Happening in Syria?
Anatomy of a Crisis 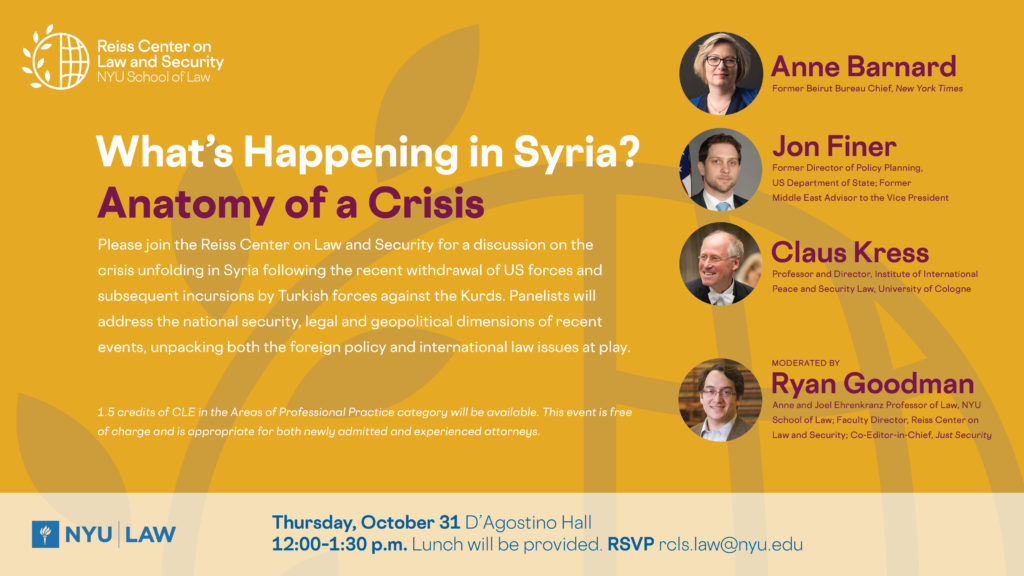 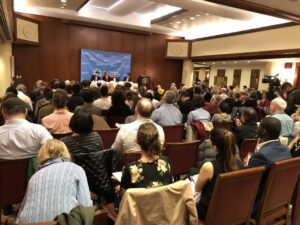 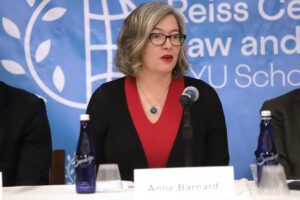 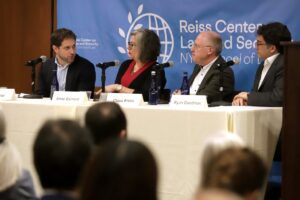 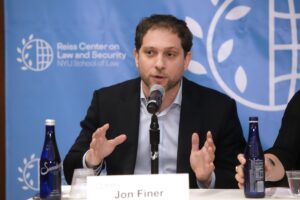 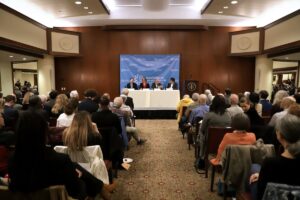 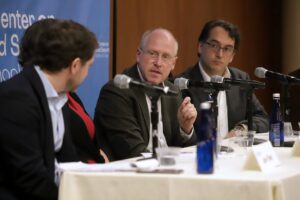 The Reiss Center on Law and Security hosted a discussion on the crisis unfolding in Syria following the recent withdrawal of US forces, and the subsequent incursions by Turkish and Turkish-backed forces against the Kurds. The withdrawal has precipitated a chaotic turn in the long-raging, complex conflict in Syria and triggered a humanitarian emergency. It may have significant repercussions for the United States’ success in the fight against ISIS. And it raises a host of issues surrounding the use of force, implications for NATO and criminal accountability under the laws of war.

Panelists addressed the national security, legal and geopolitical dimensions of recent events, unpacking both the foreign policy and international law issues at play.

1.5 credits of CLE in the Areas of Professional Practice category were available. This event was appropriate for both newly admitted and experienced attorneys.

This event was free of charge.

Anne Barnard led coverage of the Syria war for six years at the New York Times, reporting from across the Middle East as Beirut bureau chief. Since the September 11 attacks, she has chronicled the human and strategic impact of U.S. war policies on frontline areas including Iraq, Syria, Gaza, Afghanistan, Pakistan, Iran, Lebanon, Barnard has worked in the Middle East on and off since 2003, beginning as bureau chief for the Boston Globe in Baghdad, where she documented the American invasion and occupation of Iraq and its impact across the region. This year she began covering climate change and environmental issues, focusing on their impact on New York City, after completing the Edward R. Murrow Press Fellowship at the Council on Foreign Relations.

Jon Finer is a Non-Resident Advisor at the Reiss Center on Law and Security at NYU School of Law. Previously, he was the chief of staff and director of policy planning at the U.S. Department of State, serving as Secretary John Kerry’s principal advisor and helping lead the Obama Administration’s key diplomatic initiatives, including the Iran nuclear negotiations and the Paris climate accord. Finer served in the White House during the first term of the Obama Administration, starting as a White House Fellow in the Office of the Chief of Staff and also working as Vice President Biden’s Middle East advisor and foreign policy speech writer, as well as on the National Security Council Staff.

Before his time in government, Finer reported from more than a dozen countries as a foreign and national correspondent for the Washington Post, including covering the invasion of Iraq while embedded with the U.S. Marines and spending eighteen months in Baghdad during the descent into civil war.  He also covered conflicts in Georgia, Lebanon, and Gaza. Finer’s essays and opinion writing have been published in the Atlantic, the Boston Globe, the Christian Science Monitor, Foreign Affairs, Foreign Policy, the Los Angeles Times, the New Yorker, the New York Times, Politico, and the Washington Post. He began his career at the Far Eastern Economic Review, a news and business magazine in Hong Kong.

Finer has a law degree from Yale, an M.Phil in International Relations from Oxford, where he was a Rhodes Scholar, and an undergraduate degree from Harvard. He is the co-founder and chair of the Iraqi Refugee Assistance Project, and serves on the board of the Truman National Security Project, and the advisory boards of Diplomacy Works and Foreign Policy for America. He currently oversees the political risk and public policy practice at Warburg Pincus, LLC, a global investment firm.

Claus Kress is a Professor of International Law and Criminal Law. He holds the Chair for German and International Criminal Law and he is the Director of the Institute of International Peace and Security Law at the University of Cologne. His prior practice was in the German Federal Ministry of Justice on matters of criminal law and international law. In addition to his scholarly work, comprising more than 150 publications on the law on the use of force, the law of armed conflicts and international criminal law, he has been a member of Germany’s delegations in the negotiations regarding the International Criminal Court since 1998. He is a Life Member of Clare Hall College at the University of Cambridge, a Member of the Academy of Sciences and Arts of Northrhine-Westfalia, and the recipient of the 2014 M.C. Bassiouni Justice Award as well as of honorary doctorates from the State University Tbilisi and the University of Huánuco. He was a Guest Professor at Columbia Law School, Kyoto Law School, Melbourne Law School and at the European University Institute.

Ryan Goodman is the Anne and Joel Ehrenkranz Professor of Law at New York University School of Law. He served as special counsel to the general counsel of the Department of Defense (2015-16). In addition to his posts at NYU School of Law, Goodman is an associated member of the Department of Sociology and an affiliated member of the Department of Politics at NYU. Before joining the Law School, he was the Rita E. Hauser Professor of Human Rights and Humanitarian Law and director of the Human Rights Program at Harvard Law School. Goodman has published articles in leading law reviews and has also co-authored several books, including Socializing States: Promoting Human Rights Through International Law with Derek Jinks (2013) (winner of top annual book award by the American Society of International Law). His work makes significant contributions to the law of armed conflict, human rights law, and U.S. national security law. The U.S. Supreme Court relied on Goodman’s amicus briefs in Hamdan v. Rumsfeld when it overturned the government’s system of military commissions, and in Lawrence v. Texas, when it overturned an anti-sodomy statute. Goodman received his BA in government and philosophy from the University of Texas at Austin. He earned his JD from Yale Law School and a PhD in sociology from Yale University. He is a member of the board of editors of the American Journal of International Law, a member of the U.S. Department of State’s Advisory Committee on International Law, and a member of the Council on Foreign Relations. He is also the founding co-editor-in-chief of the national security online forum, Just Security.

Can Turkey be Expelled from NATO? It’s Legally Possible, Whether or Not Politically Prudent
Aurel Sari
Just Security