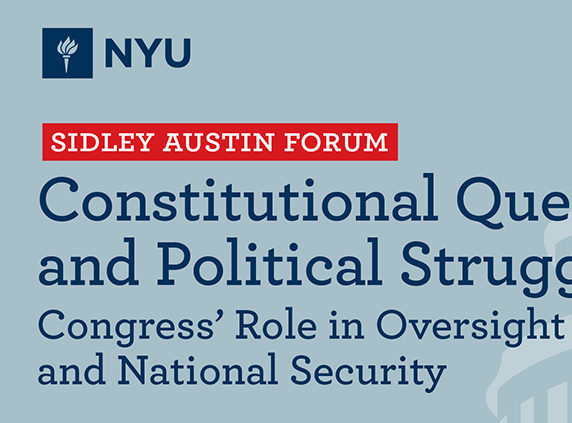 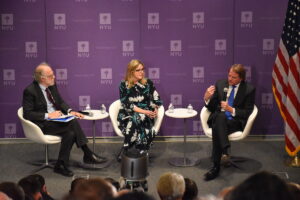 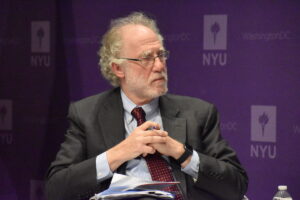 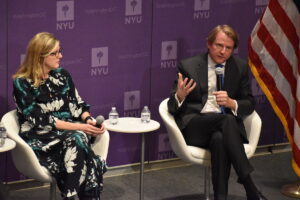 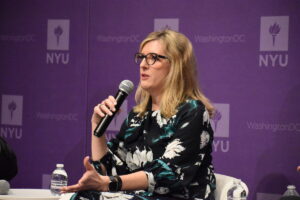 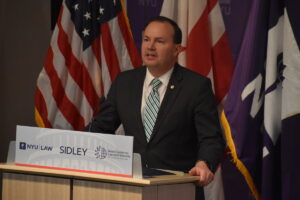 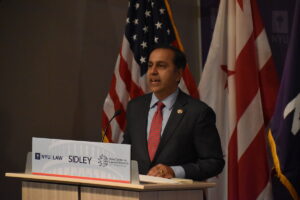 At a moment of acute contest between the branches, the program probed the views of leading policymakers on Congress’ powers, limitations and responsibilities in our constitutional system.

1.5 credits of New York State CLE in the Areas of Professional Practice category were available for those attending the White House Counsels panel. The panel was appropriate for both newly admitted and experienced attorneys. Attorneys seeking credit for states other than New York should contact RCLS.law@nyu.edu.

Moderator:
Bob Bauer, Professor of Practice and Distinguished Scholar in Residence; Co-Director of the Legislative and Regulatory Process Clinic, and Distinguished Senior Fellow at the Reiss Center on Law and Security, NYU School of Law; former White House Counsel to President Barack Obama

Mike Lee, Senator for Utah, member of the Senate Committee on the Judiciary

Raja Krishnamoorthi, Congressman for Illinois, member of the House Permanent Select Committee on Intelligence and the House Committee on Oversight and Reform

Congressman Raja Krishnamoorthi was elected in November 2016 to represent the 8th District of Illinois, which includes the west and northwest suburbs of Chicago. Raja serves on the Oversight Committee, for which he is also the Chairman of the Subcommittee on Economic and Consumer Policy, as well as on the House Intelligence Committee. In addition to this committee work, Raja was selected as an Assistant Whip and serves on the Steering and Policy Committee.

Raja’s policy platform focuses on growing and strengthening the middle class by supporting small businesses, rebuilding our infrastructure, and protecting Social Security and Medicare.  Raja knows our economy works best when it works for all of us, and that’s why he’s fighting to make college more affordable, expand access to paid sick and parental leave, and guarantee equal pay for equal work.

Raja pursued public service while practicing law and was appointed by Illinois Attorney General Lisa Madigan as a Special Assistant Attorney General to help start the state’s Public Integrity Unit created to root out corruption in Illinois.  As a member of the Illinois Housing Development Authority, Raja chaired its Audit Committee, helping to provide thousands of low and moderate-income families across the state with affordable housing.  Raja also served as Illinois Deputy Treasurer.  There, he oversaw the state’s technology venture capital fund and helped revamp programs such as the state’s unclaimed property program to become leaner and more efficient.

After his time in the Illinois Treasurer’s Office, Raja returned to the private sector, serving as president of research-oriented small businesses developing technology in the national security and renewable energy industries.  Raja also served as the Vice-Chair of the Illinois Innovation Council and co-founded InSPIRE, a non-profit that provides inner-city students and veterans with training in solar technology.

Raja and his wife, Priya, a physician, live in Schaumburg with their two sons and baby daughter.

Elected in 2010 as Utah’s 16th Senator, Mike Lee has spent his career defending the basic liberties of Americans and Utahns as a tireless advocate for our founding constitutional principles.

Senator Lee acquired a deep respect for the Constitution early on. His father, Rex Lee, who served as the Solicitor General under President Ronald Reagan, would often discuss varied aspects of judicial and constitutional doctrine around the kitchen table, from Due Process to the uses of Executive Plenary Power. He attended most of his father’s arguments before the U.S. Supreme Court, giving him a unique, hands-on experience and understanding of government up close.

Lee graduated from Brigham Young University with a Bachelor of Science in Political Science, and served as BYU’s Student Body President in his senior year. He graduated from BYU’s Law School in 1997 and went on to serve as law clerk to Judge Dee Benson of the U.S. District Court for the District of Utah, and then with future Supreme Court Justice Judge Samuel A. Alito, Jr. on the U.S. Court of Appeals for the Third Circuit.

Lee spent several years as an attorney with the law firm Sidley & Austin specializing in appellate and Supreme Court litigation, and then served as an Assistant U.S. Attorney in Salt Lake City arguing cases before the U.S. Court of Appeals for the Tenth Circuit.

Lee served the state of Utah as Governor Jon Huntsman’s General Counsel and was later honored to reunite with Justice Alito, now on the Supreme Court, for a one-year clerkship. He returned to private practice in 2007.

Throughout his career, Lee earned a reputation as an outstanding practitioner of the law based on his sound judgment, abilities in the courtroom, and thorough understanding of the Constitution.

Lee is a member of the Judiciary Committee, and serves as Chairman of the Antitrust, Competition Policy and Consumer Rights Subcommittee protecting business competition and personal freedom.

He also oversees issues critical to Utah as the Chairman of the Water and Power Subcommittee of the Energy and Natural Resources Committee and serves on the Commerce Committee as well.

In 2019, Lee became the Chairman of the Joint Economic Committee where he is overseeing the Social Capital Project.

Prior to rejoining Jones Day in 2019, Don served as Counsel to the President of the United States, advising Donald J. Trump on all legal issues concerning the President and his administration, including constitutional and statutory authority, executive orders, international agreements, tariffs, trade, administrative law, and national security. Don also managed the judicial selection process for the President. During Don’s tenure, a historic number of judges were appointed to the federal bench, including two Supreme Court justices. In addition, he spearheaded President Trump’s deregulation efforts, which resulted in deregulation at record rates. Following Don’s departure from the White House, the President appointed him to the Council of the Administrative Conference of the United States, a nonpartisan, independent agency dedicated to promoting improvement to administrative agency processes.

Don’s accomplishments have been recognized at the highest levels of government. Senate Majority Leader Mitch McConnell stated that Don concluded his tenure “not only as the best White House Counsel I’ve seen on the job, but more broadly, as one of the most successful and consequential aides to any President in recent memory.”

Don was nominated by President George W. Bush in 2008, and confirmed in the Senate by unanimous consent, to serve as a member of the Federal Election Commission. He also served as outside Counsel to the Committee on House Administration during the 113th and 114th Congresses and as general counsel to the National Republican Congressional Committee.

Kathryn Ruemmler is the Global Chair of the White Collar Defense & Investigations Practice and a partner in the Litigation & Trial Department.

Ms. Ruemmler has broad experience advising individual executives and boards of directors in a wide range of matters, with a particular emphasis on government enforcement and regulatory matters and corporate governance. She has built a reputation as a formidable litigator with an unusual breadth of experience in crisis management, policy development, and regulatory and enforcement matters. She focuses on white collar criminal defense, SEC and other agency enforcement matters, and congressional and internal investigations. She is also an experienced first-chair trial lawyer. Known for her skilled representation of clients in both criminal and civil jury trials, clients in Chambers USA 2018 say Ms. Ruemmler is “a great strategic thinker” and “a real rare talent” and praise her as “a terrific advocate,” adding that “she has the judgment, legal skills and client management skills to represent her clients effectively.” Ms. Ruemmler rejoined the firm in 2014 after serving for almost six years in the Obama Administration, first in the Department of Justice (DOJ) and later as Counsel to the President. As President Obama’s chief lawyer, she was one of his most senior advisors, providing advice on all legal matters implicating domestic and foreign policy and national security. She advised on all significant litigation matters, including the most consequential cases heard by the United States Supreme Court. Ms. Ruemmler also managed the Administration’s response to congressional and other investigations and was responsible for the selection and nomination process of federal judges. President Obama has described her as having “an uncanny ability to see around the corners that no one else anticipates.”

Ms. Ruemmler has significant jury trial experience and has tried more than 20 cases to verdict both inside the government and in private practice. She worked for six years as a federal prosecutor, first as an Assistant United States Attorney in Washington, D.C. and later as the Deputy Director of the Enron Task Force. Ms. Ruemmler was one of the lead prosecutors in the successful securities fraud prosecution of former Enron CEO’s Ken Lay and Jeff Skilling. She delivered the closing argument in that case and received the Attorney General’s Award for Exceptional Service, the DOJ’s highest award, for her performance.

Earlier in her career, Ms. Ruemmler served as Associate Counsel to President Bill Clinton where she defended the White House and the Office of the President in independent counsel and congressional investigations. She began her career as a law clerk to Judge Timothy K. Lewis of the United States Court of Appeals for the Third Circuit.

Bob Bauer is a Distinguished Senior Fellow at the Reiss Center on Law and Security at NYU School of Law, where he is also a Professor of Practice, Distinguished Scholar in Residence, and Co-Director of NYU’s Legislative and Regulatory Process Clinic.

Bauer served as White House Counsel to President Obama beginning in December 2009 and returned to private practice in June 2011. In 2013, the President named Bauer to be Co-Chair of the Presidential Commission on Election Administration, which submitted its Report in January 2014. Bauer served as counsel to the Democratic Leader in the impeachment trial of President Bill Clinton (1999).

Bauer is the author of several books on campaign finance law and articles on various topics for legal periodicals and journals, most recently in the October 2018 issue of the New York University Law Review on the role of debates in the presidential nominating process and in the spring 2018 issue of the Georgetown Journal of Legal Ethics on the role of lawyers in a national security crisis. Bauer is a Contributing Editor of Lawfare and has also written for Just Security. He has published opinion pieces on constitutional and political law issues in The New York Times, The Washington Post, and The Atlantic. In 2000, he received the “Burton Award for Legal Achievement” for his legal writing.