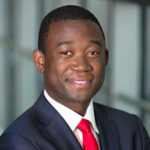 Wally Adeyemo is a Non-Resident Senior Fellow at the Reiss Center on Law and Security at NYU School of Law, President of the Obama Foundation, and a Senior Advisor at BlackRock and the Center for Strategic and International Studies. Adeyemo previously served as the Deputy National Security Advisor for International Economics and Deputy Director of the National Economic Council, serving as President Obama’s senior international economic advisor. He also served as the president’s representative to the G7 and G20.

Prior to joining the Obama Administration, Adeyemo was an Editor for the Hamilton Project, a program at the Brookings Institution focused on advancing public policy proposals that contribute to long-term economic growth. He received a B.A. from the University of California, Berkeley and a J.D. from Yale Law School. Follow him on Twitter @wallyadeyemo.