U.S. Withdrawal from Syria and Afghanistan: Strategic and Legal Consequences

Home/U.S. Withdrawal from Syria and Afghanistan: Strategic and Legal Consequences

U.S. Withdrawal from Syria and Afghanistan: Strategic and Legal Consequences 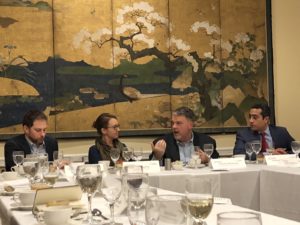 In December 2018, President Trump’s apparent directive to withdraw all U.S. troops from Syria and reduce troops in Afghanistan by half sparked a heated national security debate about the future role of U.S. military engagement and intervention. Some of the controversy was generated by the manner in which these consequential decisions were made, while some was focused on the ramifications of potential redeployments for key U.S. policy goals. Drawing on their experience over many years at senior levels of government, the speakers framed the strategic and legal consequences of potential U.S. troop withdrawals in Syria and Afghanistan, and provided a basis for a wide-ranging discussion among attendees. The discussion was moderated by Michael Wahid Hanna.

Tess Bridgeman is a Senior Fellow and Visiting Scholar at the Reiss Center on Law and Security at NYU School of Law and Senior Editor at Just Security. She teaches national security law courses at Stanford University and Berkeley Law. Bridgeman served as Special Assistant to President Obama, Associate Counsel to the President, and Deputy Legal Adviser to the National Security Council (NSC), where she covered the full range of issues relating to the national security and foreign policy of the United States, and previously served at the U.S. State Department in the Office of the Legal Adviser.

Jon Finer is a Non-Resident Advisor at the Reiss Center on Law and Security at NYU School of Law and adjunct senior fellow at the Council on Foreign Relations. Previously, he was the chief of staff and director of policy planning at the U.S. Department of State, serving as Secretary John Kerry’s principal advisor and helping lead the Obama Administration’s key diplomatic initiatives, including the Iran nuclear negotiations and the Paris climate accord. Finer served in the White House during the first term of the Obama Administration, starting as a White House Fellow in the Office of the Chief of Staff and also working as Vice President Biden’s Middle East advisor and foreign policy speech writer, as well as on the National Security Council Staff.

Nicholas Rasmussen is currently the Senior Director of Counterterrorism and National Security at the McCain Institute and Non-Resident Senior Fellow at the Reiss Center on Law and Security at NYU School of Law. Rasmussen served as director of the National Counterterrorism Center (NCTC) from 2014-2017. Rasmussen held senior posts across three White House administrations, serving in senior positions on the National Security Council (NSC) staff under Presidents Bush and Obama before being appointed Director of NCTC by President Obama and continuing his tenure at the request of President Trump’s administration in 2017.

This dinner is part of a series of salon-style discussions hosted by the Reiss Center on Law and Security and The Century Foundation, focusing on pressing national security issues of the day.